These Insanely Cool Companies Will Let You Work From Home

From massive corporations such as Amazon to smaller tech companies, these are the businesses that offer the best chance to work at home. 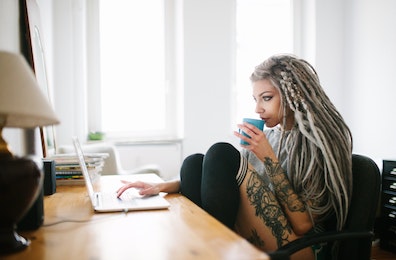 Face it: Whenever a friend tells you she gets to work from home, you get a little jealous. Offices are nice and all (especially when the snacks are free) but there's something to be said for saving money and time on a commute.

We’ve got good news for you.

Nearly 25 percent of employees in the United States did at least some of their work from home in 2015, per the Bureau of Labor Statistics. According to FlexJobs, employment openings that offer telecommuting have grown by 52 percent over the last two years.

These corporations have figured out that letting employees work at home is a savvy way to reduce costs, improve productivity and increase retention. Smart companies can (and will) offer flexibility as a job perk for prospective workers.

For the past four years, FlexJobs has narrowed its 47,000-company database down to 100 corporations that posted the most WAH-friendly jobs on the market.

We’ve picked five of the coolest companies on that list. If you’re currently on the hunt for a flexible, remote job, you should absolutely start with these five companies.

Ranking third on FlexJobs’ list, Amazon is, of course, the largest online retailer in the world. Incorporated by Jeff Bezos in 1994, Amazon has grown into a Fortune 100 company that employs nearly 92,000 people.

Amazon typically posts telecommuting job listings for their human resource and customer service departments. The company recently announced that it’s hiring 5,000 virtual employees in 2017. At the time we first looked into this, Amazon had nearly 200 open work-at-home jobs on their site.

Named one of the "World’s Most Innovative Companies" in 2015 by Forbes, Adobe is known for its computer-based technology, such as Flash and Photoshop.

In 2017, the San Jose, California-based company was selected to Fortune’s "100 Best Companies To Work For" for the 17th year.

IBM is an award-winning consulting and tech company that has recently shifted its business plan to focus on cloud computing and analytics.

Ranking 22nd on FlexJobs’ list, the Armonk, New York-based business has recently posted telecommuting jobs in their sales, engineering and customer service departments, among others.

About.com, which recently rebranded as Dotdash, is an online publisher that provides useful information to readers in their day-to-day lives.

Based in Provo, Utah, Vivint Smart Home is a home automation and security company that has more than 900,000 customers in North America.

If you’re searching for flexibility from a top-notch employer, then these five companies are a great place to start.