Here’s how you can reap some rewards in cryptocurrency without taking on all the risk. 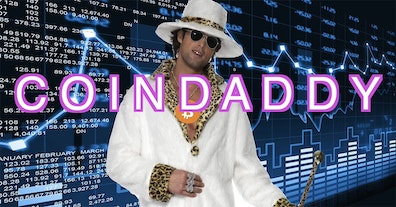 OK, I’ll admit it: Even I fell victim to bitcoin FOMO this year.

How can you not, right? The price of a single bitcoin shot to the moon in 2017, running up roughly 1,240 over the course of a year. Plenty of small investors became stupid rich, stupid quick. College students are cashing out and buying Lambos. There’s an absurd crypto rapper named Coin Daddy who now has more money than we ever will. Crypto was a big ol’ cash party last year, and it seems like everyone was invited … except for us.

Of course, as the Great Bitcoin Crash of 2018 taught us, speculating in cryptocurrency is risky as hell -- really, it’s more of a gamble than a legit investment. As I can personally attest, large price swings have caused fortunes to disappear in minutes. Major coin exchanges have shut down, and some operators are accused of running a Ponzi scheme. And what if some hacker swoops in and steals your fortune -- it’s happened before

The good news is this: These days, you don’t need to actually buy bitcoin like I did to invest in cryptocurrency and the technology behind it. Here’s how some investors are betting on bitcoin in 2018… without actually buying it.

Mine for your own bitcoin

If you’ve got a relatively powerful new PC, you might want to loan some of its graphics processing power to help run the bitcoin network. This supportive maintenance work, called mining, pays in bitcoin. And right now, it’s the most cost-effective way to get some of that sweet digital coin.

First, you’ll need to download a bitcoin mining program such as CGMiner to your PC. Second, you’ll need to join a mining pool -- that is, a group of computer owners that pool their processing power together. By working together with others to “solve” the blockchain, you’ll earn small fractions of bitcoins over time. You can cash these in as you earn them, or save them up in case bitcoin swings back and heads moonbound. You do you.

It’s not a simple process to set up, and you will need to pay for the extra electricity your computer uses to mine for the coins. That said, it’s a good way to accumulate small amounts of cryptocurrency if you’ve already got the hardware. My new gaming PC (with a 3GB GeForce GTX 1060 graphics card) is currently making me between $30 and $50 per month.

You can read up more on how to mine cryptocurrency here.

Invest in a company with exposure to the blockchain

High-powered graphics cards are flying off store shelves for use in bitcoin mining. This market is largely owned by GPU makers Nvidia and AMD. The former had an especially strong 2017, offering investors a near 82 percent return, though Wall Street firm Morgan Stanley warns that 2018 may not be as great a year for cryptomining sales.

There are other ways to play bitcoin on the stock market, too. Online retailer Overstock.com, one of the first e-tailers to support purchases made with bitcoin, has been slowly building a reserve of the currency with each sale and is researching blockchain tech. Its shares were up 265 percent in 2017. Mobile payment processing company Square, which has announced plans to offer bitcoin trading, jumped 154 percent in 2017. Even IBM, Microsoft and Amazon offer limited exposure to bitcoin and blockchain tech … without full exposure to bitcoin’s risk.

The most risky bitcoin play on the market? That award goes to the Bitcoin Investment Trust, trading under ticker symbol GBTC. It’s a holding company that owns nothing but bitcoin.

Disclosure: At the time of this writing, Fox was long Nvidia (NVDA) and Amazon (AMZN). He was also long a tiny fraction of a bitcoin, to his continued dismay.