Now That I Own Bitcoin, I Can’t Sleep at Night. Here’s Why

Here's what you need to know before you buy in too 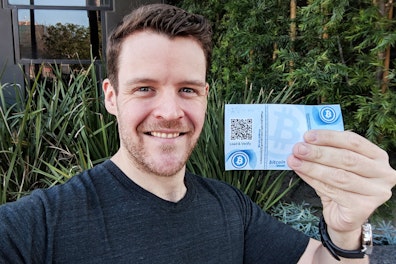 A couple months ago, I bought a tiny fraction of a bitcoin. One hundredth of a coin, to be exact.

How much harm can a simple little investment cause, really?

As it turns out, a lot. At least to my nerves. Because now that I own my slice of the digital pie, I’m scared someone is going to come steal it from me and eat it.

Here’s what I’ve learned thanks to HODLing a tiny piece of bitcoin — and what you need to know before you buy in yourself.

As I explained last week, I bought my hundredth of a bitcoin on Coinbase, a largely reputable exchange. They keep cryptocurrency in cold storage — that is, stored offline where hackers (supposedly) can’t get to it.

Before I bought, I liked the idea of keeping my bitcoin there. But then came the hacks.

First, it was Coincheck. In January, I learned that the Japan-based cryptocurrency lost $530 million to a hacker because, as it turned out, only some of their coins were in cold storage. Then last week, I found out that hackers stole $170 million from another exchange, Bitgrail, who again, had coins improperly exposed.

The more I read, the more I kinda freaked out; other exchanges, for example, are losing access to banking services. And cold storage wallets can’t protect against an (alleged) inside job!

Given the shocking frequency of these problems, how could anyone sleep with their money sitting in an exchange? I needed to do something. Fast.

So where should I keep my bitcoin, anyway

After a couple nights of tossing and turning, I realized that the only way I’ll ever rest easy is if I physically own my bitcoin myself. The only question was … how the heck do I do that, safely?

I did a lot of reading on Reddit and Medium, and it sounds like most bitcoin ballers keep their coins in a specialized hardware wallet, such as the Ledger Nano. It looks really cool. But at $100 each, they cost about the value of the bitcoin I have ($105), so they’re not a viable option.

There are wallet apps for my PC, Mac and Android phone, too. But my devices are always connected to the internet. And I want to keep my bitcoin as far from the internet as I can.

So I decided to keep my bitcoin in a paper wallet. Because you can’t get more offline than a physical piece of paper.

Here's how you make digital currency into physical currency

The process of creating a paper wallet is pretty easy. I used bitaddress.org to create mine. I saved a version of the site to my computer, disconnected my computer from the internet, and then opened the html file I saved.

After moving my mouse around the html page to generate random numbers, I was able to print off my first paper bitcoin wallet. I chose to create a password-protected version.

I loaded my paper wallet with bitcoin via Coinbase, sending my crypto to the address printed on the “Load & Verify” side of the wallet. I’ll keep my money stored in the paper wallet until I’m ready to spend it.

Come at me, hackers, you (probably) can’t get this coin

Now that I have a paper wallet, I’m keeping my bitcoin locked up in a safe. I took this weird, digital money and I made it into a real thing. And that makes me feel better about owning bitcoin.

Admittedly, someone could still steal my stash of coin. A catburglar could pull an "Oceans Eleven"-type caper, break into my apartment, and steal my safe. Still, I feel good enough now about my bitcoin’s security that I can at least get to sleep without chugging a bottle of Nyquil.

Besides, I don’t plan at stopping at just 0.01 BTC. I’ve got big bitcoin dreams. And now that my stash is secure, it’s time to go about growing it in the most cost-effective way possible.

That means — yup — it’s time to start mining for crypto. Stay tuned, my friends. It gets a lot more lucrative from here.