You can pay off your debt. We’ll tell you how. 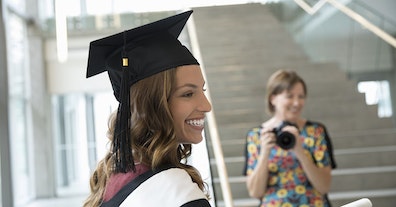 If you heard that a woman with $38,000 in student loan debt paid it off in seven months, you’d probably bet she was making bank at her day job.

Michelle Schroeder-Gardner was only making $50,000 a year as a financial analyst straight out of college, and still got rid of that chunk of debt in less than a year. That means that if she can do it, you can too.

Turns out, money management and health management are super similar, and not just because they’re usually a part of your New Year’s resolutions.

Think about it: When people want lose weight, they don’t just start working out, or just start eating better. They do both. It’s common sense. And yet, when people want to save money or pay off debt, they usually just focus on one thing: Spending less.

That’s only half of the equation. The other half, as Schroeder-Gardner found, is making more money.

"Usually there's a limit to how much you can save," Schroeder-Gardner said. But bringing in more dough is virtually limitless… if you know what you’re doing.

Make your free time work for you

You have plenty of free time, even if you don’t know it. Think about all the time you spend watching "Seinfeld" or trolling on Twitter. Yeah, that might help blow off steam. But would you need to blow off that steam if you were debt-free?

Calculate how you spend your out-of-work time each week. You’ll probably be shocked to find out how much time you waste. And that’s money you’re leaving on the table.

Work when you can

Even if you just have a spare 15 hours a week, you can make a serious dent in your debt with that.

Lucky for you, we live in a gig economy. What does this mean? There are tons of opportunities to make money when it’s convenient for you. Sign up to work for a company like Taskrabbit, where you run errands for people. (A TaskRabbit VP has bragged that 10 to 15 percent of TaskRabbits earn up to $7,000 a month.)

Or become an Uber driver. If you can, start freelancing with the skills you use in your everyday job.

Make money doing what you love

Schroeder-Gardner upped her income by blogging and signing up to be a mystery shopper — things she probably would have been doing for free. It took six months for that blog to start making money. But now? Boy does it make bank. It reportedly rakes in about $100,000 a year.

So what are you up to today after work?

Do you love to ride your bike? Become an aggro, "Portlandia"-style courier.

Love to take pictures? Become an event photographer on the weekends.

You get the picture. You can make money outside of your job while doing things that you probably enjoy more than your job.

As for Schroeder-Gardner, she liked blogging so much (and made enough money doing it) that she eventually quit her job and started traveling. But even if leaving your day job in the dust isn’t your goal, and you just want to get rid of some debt, remember that eating out and shopping less alone aren’t going to get you there as quickly.