If your password is StarWars, you’re gonna want to go change it right now. 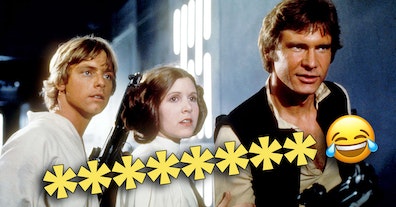 Maybe you got your credit card data swiped when Target had their systems hacked back in 2013 (ours did). Maybe you inadvertently clicked on a phishing link and your Twitter account got hijacked by a bot posting nothing but bare-naked butts (sorry, Mom).

We’ve all been at least tangentially impacted by cyberattacks and data breaches.

So how can we keep ourselves safe when hackers are working full time to get our personal info?

Easy. We can start using less-silly passwords, specifically on accounts where we keep our money. That means bank accounts, online retail accounts, and credit reporting services should have passwords that, well, aren’t any of these:

ZDNet asked network security experts which way-too-crackable passwords Americans were using way too much. Here’s what they found out.

It doesn’t take Mr. Robot’s Elliot Alderson to crack this popular password. Any hacker worth a bitcoin could gain access to your account within just a few minutes. The Exploit.in password dump revealed this was common among the 800 million-plus users whose info were stolen and leaked onto the dark web.

Can someone -- anyone -- explain why one would choose to make this a password? The cybersecurity startup Preempt has said this password choice is both way too common and way too simple to keep hackers out.

Sophia is right: Celebrating moms is great... on birthdays and Mother’s Day. Your mom kept you safe when you were a kid, but she doesn't stand a chance as a password. The Exploit.in dump revealed the popularity of passwords featuring both "YourMom" and "MyMom." When choosing a password, just keep everybody's mom out of it.

Much like your mom, superheroes can't save you from having your accounts compromised. According to ZDNet, people with Batman and Superman passwords are leaving themselves vulnerable to being hacked.

According to ZDNet, passwords containing common pet names like Buddy and BabyGirl are easily cracked. If your pet has a unique name, don't get complacent, as passwords referencing Keppie and Bowser are only slightly less obvious.

Security experts have said this alphanumeric reference from Shakespeare’s “Hamlet” is found in every single password dictionary that hackers use to steal your information. It's better for this one not2be your password.

We've got bad news for you, Trekkies out there. The registry number for the Federation ship Enterprise is not only a widely known piece of pop culture trivia, but it's also a terrible password.

Star Wars fans looking to use the Force to protect their checking accounts are also out of luck; "ut4luke," a leetspeak abbreviation for "use the force, Luke," has shown up among leaked passwords on the dark web.

Justin Bieber has 105 million Twitter followers, more than 95 million Instagram followers, and, according to ZDNet, you’ll find his name in every hacker's password dictionary. Sorry, Beliebers.

More from Get Smarter