The alumni from these top MBA programs could make or break your business school decision. 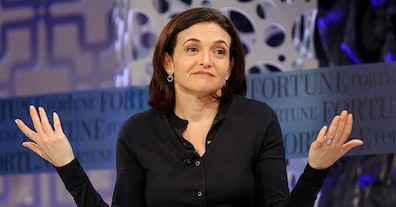 So, you want to go to business school? Choosing from all of the top MBA programs can be daunting, but it’s important to think what it is that you ultimately want to get from the experience.

Harvard Business School is not only a big dog in the world of MBAs, but also a unique problem-solving foundation built by using the case method. In each class, students receive cases centered around a protagonist. They then put themselves in the protagonist's shoes to solve problems using only the information provided. This sort of training makes Harvard Business School alumni adept at management and decision making.

Just ask Sheryl Sandberg, class of 1995, who became the COO of Facebook in 2008. She found a way to monetize the primarily social site. Or Beetlejuice, who went on to star in a hit movie in 1988. (That was a joke. Are you paying attention?) Or Sal Khan, class of 2003, who created Khan Academy, the Bill Gates- and Google-backed nonprofit organization that creates online tutorials and educational videos.

Founded in 1881, the Wharton School of the University of Pennsylvania is the United States’ very first business school, and its power in the business world is comparable with its historical standing. The Wharton School MBA class of 2016 statistics show that, coming directly out of graduation, 98.3 percent of students already had full-time job offers, and that the median base starting salary was $125,000. Sometimes the money is a nice byproduct of changing the way we access information and each other, like Jeff Weiner, CEO of LinkedIn, or Sundar Pichai, the CEO of Google.

Learning new things is all well and good, but being able to jump in and get your hands dirty is such an important part of success. That’s why the Booth School of Business’ New Venture Challenge is such an amazing opportunity; it’s a business plan competition mixed with a startup accelerator, and it has massive financial awards for the most unique and lucrative business ideas. Just ask Matt Maloney, class of 2010, who won with his website, called Grubhub, that changed the food-delivery game. As of 2016, Grubhub was worth $1.2 billion.

Started by President Herbert Hoover in an effort to stop elite business minds from taking their brands eastward, Stanford University’s Graduate School of Business, in California, is actually the oldest business school west of the Mississippi. This b-school is all about outside-the-box learning, training its students with real-world simulations that involve teamwork and coming up with tons of solutions to a single problem. Just ask graduate Joe Coulombe, who found that people who traveled the world often came home to grocery stores that didn’t offer the breadth of foods that they’d tasted on their travels. The passion to solve this problem led to Trader Joe’s. What about trying to find a high quality running shoe for a low production cost? That was a problem that Phil Knight solved after he graduated with an MBA from Stanford, and founded Nike.

No matter what business school you choose, remember that a passion for solving problems will often get you further than the school name on any diploma can.

More from Get Smarter